America Needs A Coming To

Let’s talk about this — again. African identity is not a punch line for cultural imperialism. Eddie Murphy does not seem to get this point and Craig Brewer’s Coming 2 America (2021) does not seem to care. This film is so blatantly loaded in mischaracterisations of Africa that one would think Ryan Coogler’s Black Panther (2018) is a documentary.

Set in a realistic African community, this film chronicles the tensions of African identity, the internal perspectives of our lives and the overcoming of sexist oppression by independent women characters.

Oh wait! It’s actually set in some vague kingdom territory of Africa called Zamunda, trapped in extremely derogatory politics and overrun by African Americans speaking in the Hollywood African accent, joined at least by some South Africans in the cast, Trevor Noah and Nonzamo Mbatha. The new it-thing in Hollywood is to conscript a few African people in films so they can claim they can’t possibly be offensive.

Wrong. Coming 2 America is an atrocious portrayal of African identity and custom and it’s supposedly anti-sexist politics completely misses its aim. The plot revolves around conflict between the exotic and ever-dancing Nexdorians, led by General Idi, I mean Izzi (Wesley Snipes), who threatens ethnic war if one of the Nexdorians don’t marry into the royalty of the Zamdanian, I mean Zelmodian, or whatever. “Zamunda. Wakanda. Connecticut” jokes Uncle Reem (Tracy Morgan) at some point in the film. Seems I’m not the only one who doesn’t care for the name of this place.

All this comical theatric leads to King Akeem (Eddie Murphy) returning to America (for about half an hour, it seems) to find his son, Lavelle Junson (Jermaine Fowler) that he did not know about (oops), so that Lavelle can become an heir to the throne. Hmmm, a Black USian travelling to Africa to become king. Surely, Hollywood hasn't tried that before.

Most of the women characters provide support or comic relief to the main storyline. Among them is Meeka (KiKi Layne) who is Akeem’s eldest of three daughters and helps Lavelle gain confidence and competence, Mirembe (Nomzamo Mbatha) who is Lavelle’s love interest, Mary Junson (Leslie Jones) who is Lavelle’s mother, Lisa (Shari Headley) who is Akeem’s wife, Bopoto (Teyana Taylor) who is to marry Lavelle, Imani Izzi (Vanessa Bell Calloway) who was supposed to marry Akeem in the prequel, and Akeem’s two younger daughters, Omma (Bella Murphy) and Tinashe (Akiley Love). So much for the anti-sexist message of the film. These women characters are given subsidiary roles in this film centering around its men leads. 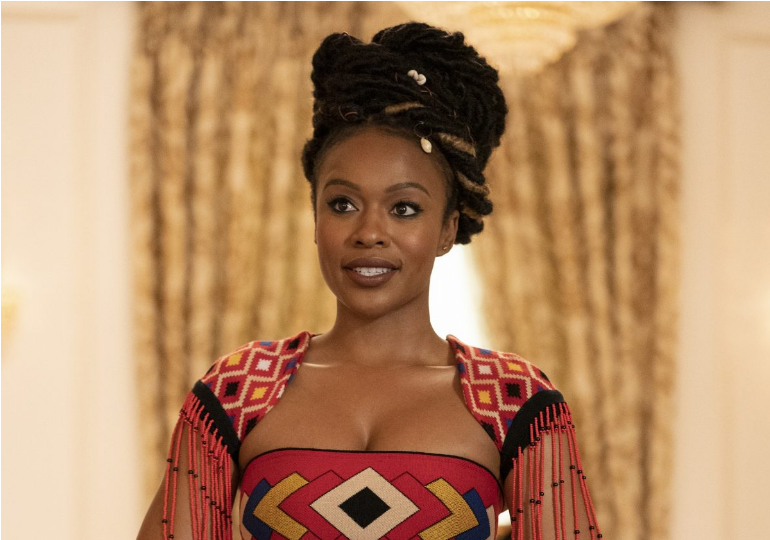 Lavelle is a Black American who arrives in the culturally backward, lion-whisker hunting (yes, lion-whisker hunting), exotic sexual ceremonial dancing, RnB-singing, “riding elephants and chasing Tarzan'' Africa. He is meant to be the “heir with a nutsack” because Zamunda does not allow women to rule, despite how competent Akeem’s daughters are in combat (seems to be the message of the film, one may think). Instead, Junson rejects these cultural traditions that he has cherished and called his own for about a few days, returning to the cultural traditions of the free and liberated United States that he has known his whole life, encouraging the very-hardened but easily influenced King Akeem to finally recognise gender equality.

It only took a USian for the message to finally resonate, nevermind Akeem’s three very capable daughters who have been saying just as much for a long time, seemingly. The eldest daughter, Meeka (whose name is an ananym of Akeem because of course!) reveals she had long since been preparing to rule. But, the Africans only listen to fellow men, especially if they come from the United States. Good thing Akeem (unknown to him, as a Black father, of course!) had a son with Mary, a woman he compared to a boar, and this son was able to come to Africa to correct our ways.

Some might see this film as an obvious parody and critique of the American saviour complex and of patriarchal values. For instance, late night host Totatsi Bibinyana (Trevor Noah) is seemingly tease-critiquing African customs saying that Lavelle is incompetent in many ways but adding, “He’s a man. That’s good enough”. However, there is way too much evidence in Coming 2 America of using such awful experiences of Africans and women for humour, instead of criticism. Take for instance the scene in the New York barbershop where a group of men joke about sexual harassment. “You can’t even squeeze a tit nowadays. It’ll get you fired,” remarks the one man. After Akeem sarcastically responds, the other man says, “Oh it’s okay. I got it in when I was young”. Earlier in the film, Akeem says “this is bullshit” when his wife, Lisa (Shari Headley), refuses to have sex with him. There is also the scene where Akeem’s servant and friend, Semmi (Arsenio Hall) says, “I was looking for the perfect vagina — or any vagina”. At some point, we need to stop making excuses for films or try to find ways to read them less offensively. This film is overtly patriarchal.

Really unforgivable is the scene which suggests that, and then simply brushes off that, Akeem was drugged and date raped. There is no justifying the use of rape for comic relief, lazy storytelling or shock value. It’s atrocious that the film never addresses this incident as something worth condemning instead making a joke about Akeem thinking, while drugged, that he was being attacked by a boar, when really what was happening was he was being violated by Mary, who went on to become close friends with his wife. There is something seriously deplorable in this form of comedy.

There is the offscreen scene (to keep the sequel PG-13) where three women servants nakedly bathed Lavelle. This is a repeat of the scene in the prequel where three naked women servants bathed Akeem, shown on-screen (the original was R-rated). That’s not the only offensive scene this sequel mimics. The opening sequence, the barbershop scenes, the exotic dances and the fully obedient women claiming they like whatever the Prince likes, are all copied from the first film.

Overall, we cannot excuse the derogatory humour made about women and the film’s deliberate choice to cast women in subsidiary roles. This is made worse by the suggestion that such sexism simply requires people from the U.S. to come fix it, especially when the U.S. men in the barbershop joke about fixing African women’s breasts for them. The film also brings back the sexist musician character from the first film to sing “Sexual Chocolate” which sounds about as cringe as one would expect in a film running high on fixing its problems by marrying women off to men and joking about gender affirmation surgery being turning penises into vaginas (seriously, the film goes there). Ironically, the film seems to recognise its own patriarchal drivel comparing one of its characters to a “womanising, sexist officiant” and then doing absolutely nothing about that. The show just went on.

Coming 2 America also joins the proud tradition of casting people from the diaspora in prominent African roles. This is an already long list. It includes Don Cheadle in Hotel Rwanda, Idris Elba in Beasts of No Nations, Denzel Washington in Cry Freedom, James Earl Jones in Cry, the Beloved Country, Whoopi Goldberg in Sarafina!, Forest Whitaker in The Last King of Scotland, Sophie Okonedo in Skin and the eight diaspora actors who played Nelson Mandela in various films -- yes, eight.

Eddie Murphy actually joined this list before most of the others, starring as fictional African prince, Akeem in Coming To America (1988). Much like this sequel, the original was also an offensive portrayal of Africa with elephants randomly crossing where you walk, jokes about goat herding, using juice and berries to moisturise hair and how you have to be aggressive to survive in Africa, a character making funny of Africans by saying we chase monkeys, and Lisa asking, “does everyone in Africa sound like you?” (Trick question, no one in Africa sounds like whatever Eddie Murphy sounded like in that film). The original also relies on immense sexism from men characters, the use of marrying women off to resolve its plot and an awful montage of various women suitors that the film called emotionally damaged. Yikes! One ironic part of the original film was a museum scene with African art hanging on its walls.

The sequel also has its ironies, such as calling a character Mufasa when James Earl Jones was in this cast for this film. But usually, its Easter Eggs were just offensive, such as the “Idiot Amin” joke. Contrast this to praises of Barack Obama, Michael B. Jordan and Denzel Washington. The message here could not be clearer, except if the movie actually went and said it out loud. Well, it did. In one line, Mirembe says, “American cinema is the best”. Ah yes, the Africans spending their time praising USians. That seems to be what the film is asking us to do or portraying us as, while giving us ridiculous fake names (like what in the exoticised nonsense is Nexdorian?). 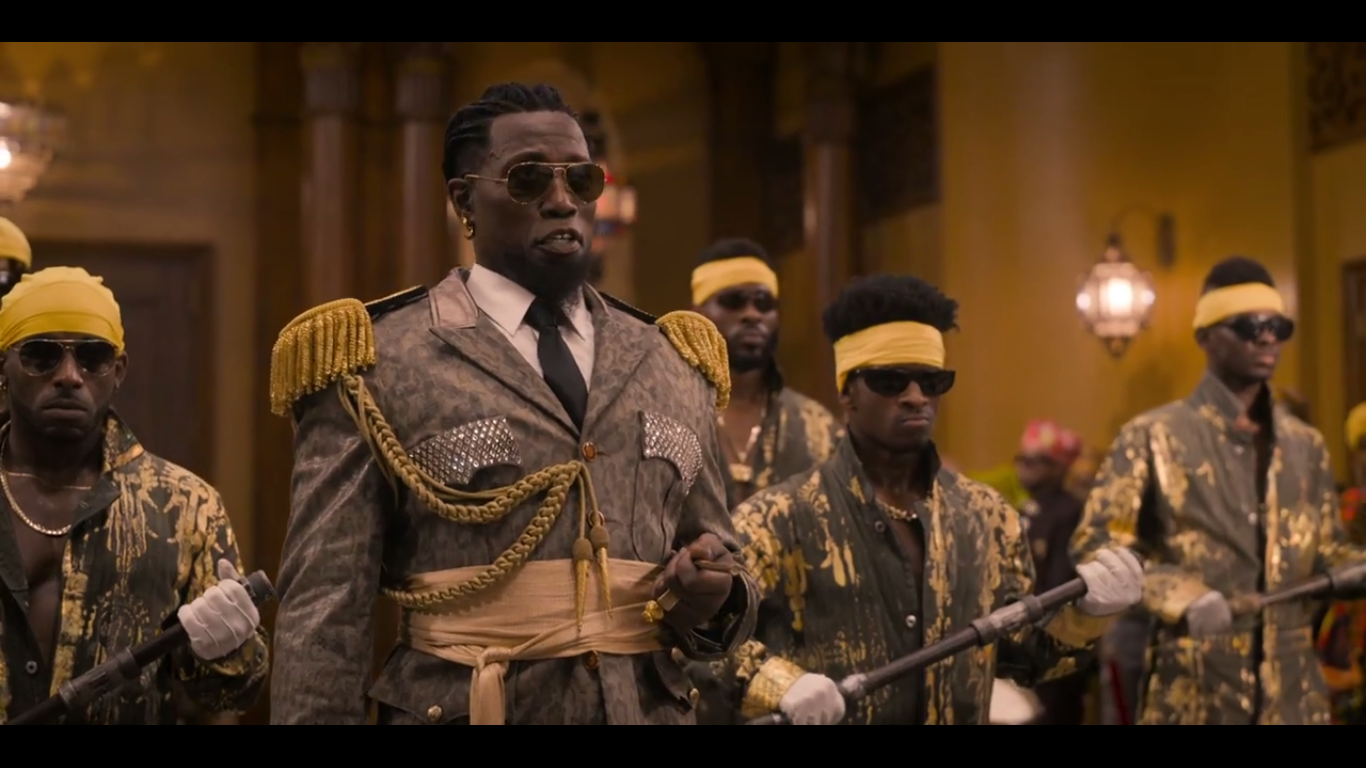 Wesley Snipes as General Izzi with a troupe of dancers.

Coming 2 America is loudly proclaiming that Africa is fake, that our customs are ridiculous and that by going through a process of becoming American we attain progress, identity and peace. It portrays Africa as fictional as Zamunda, as falsely conscious as its King Akeem and as hopelessly in need of saving as its princesses. Of course, the United States will come to the rescue.

Suddenly, General Izzi (not to be confused with the Nigerian Izzi people since this film is made up and all right, right?) gives up on his promise of war because the USians have saved the day. Oh and trade routes apparently opened. Who could have guessed that simply opening trade routes would solve Africa’s problems.

By doing this, the film erases Africa, eliminates our time as lived, our real experiences of the world and washes over the genuine and serious imperialism Africa suffers from the United States. We are migrants to our own continent, awaiting the return of the diaspora to be the rightful kings. This is the message constantly repeated to us in Black Panther (2018), Lion King (1994), Lion King (2019) and Black is King (2020).

Another way these films erase Africa is through the over-the-top regal displays of some nonexistent African kingdom. It sensationalises Africa as a hypothetical cultural experience meeting the fantasies of the diaspora and in this case, Craig Brewer. Africa ceases to exist but in their imaginations as some place, not some real place, just some mystical regal kingdom. This aesthetic appropriates African identity for some cinematic fetish. It twists our context for their narratives. We become setworks in a Hollywood studio, reduced to 100 minutes of laughter.

Well, it’s not funny. It’s cultural imperialism. At some point, mainstream films need to stop treating Africa as an exotic joke. The only wackiness here are a bunch of diaspora actors in fake accents trying to save a fake Africa, and only revealing that they’re the one that need some coming to.