Cion Remembers Ways of Dying and Ways of Thriving

At the point of no return, when you have to exist in survival mode, you can begin to remember what you forgot you knew. You can remember freedom. Like a cion (or scion), a plant used for grafting onto a rootstock- in order to continue flowering after being cut off from its own roots- a people can artfully remember their own freedom by creating new ways of being. Migration teaches us this: at the point of no return people can graft new roots and move from surviving to thriving. But, when you are all roots without a head, as South Africans seem to be when it comes to Afrophobia, can acts of mourning remind us we can still bloom? Cion by Gregory Vuyani Maqoma, is a work that begins at the point of no return. Its first movement is a wail. The mournful cry is picked up by the solid sound of a full choir and turned into song. The headless weeping of an individual becomes a flowering of sound. The song awakens the dead and the stage, setup like a graveyard- littered with wooden crosses- simultaneously becomes a church - wooden crosses floating above the space - where the dead can finally return and dance. Cion is a requiem for ‘those who have died not by their own actions but by the actions of others’, director-choreographer Maqoma reflects. ‘It is a lament’, he says. The experience is also of how art brings together different parts.

For Maqoma, whose production is inspired by a character from Zakes Mda’s novels Ways of Dying and Cion, Mda’s meeting of mourning with slave-memory is a political journey. One that Maqoma artfully combines with Maurice Ravel’s Bolero, creating an entirely new work. Mda’s character Toloki is a professional mourner who travels to the U.S. in search of other ways of mourning. Ravel’s orchestral is a romantic piece borne from the composer’s love of the machine sounds at his father’s factory. Maqoma remembers how the character of mourning met the loving music, 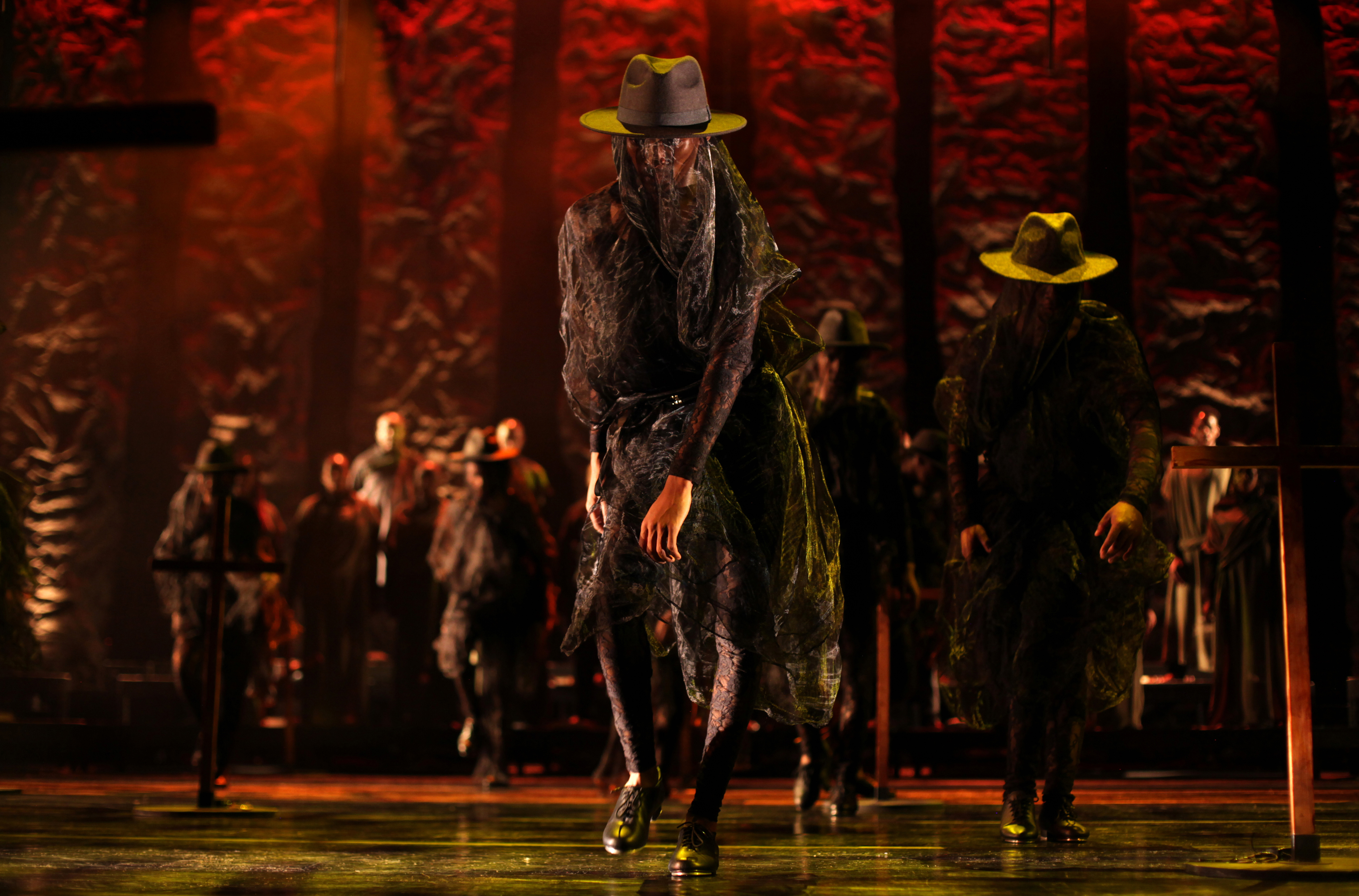 ‘It’s up until mmmm when I was confronted by death. My my my, my father passed. I was in the U.S. in 2008 and on my way back I was playing this on my, on my earphones... It became a lament for me.’

Maqoma takes this personal experience of how the music ‘brought me to be in touch with my real feelings’ and transforms it into a political and personal experience of collective mourning. The amplified version of Cion: Requiem of Ravel’s Bolero premiered at the Joburg Theatre’s expansive Nelson Mandela stage on 05 September 2019. In the week of 01-08 September 2019, twelve deaths occurred due to Afrophobic attacks. In this context, I saw Cion. I sat in the theatre and wept. The amplified performance had the full Soweto Gospel Choir chanting-singing the Bolero with beatboxer Beats Emlonyeni pumping its heartbeat. I wept at the horrors of people killing one another. I wept also, at the beauty in which the language of love resonated in that spectacular piece. Love was grafted to death. The space was charged. Cion culminated in the tapping of lost souls on the floor; tap-dancing in a flourish of black veils covering the dancers from head to knees. Maqoma says, ‘The end is to awaken every ghost’. The tap dancing of Black ancestral spirits also awakens the memory of other ways of dying.

Maqoma takes this further, in his crafting of storytelling ‘at the point of no return’. To Beats Emlonyeni he’d asked, ‘Imagine if you’ve lost every single part of you…But, also, if you have everything that you are now but, it is so misplaced that the only thing you carry with you is about killing somebody else…What is it that you would keep? Beats Emlonyeni, delivers a poem saying, ‘Angiyifuni/ Angiwufuni’ denouncing everything in his material existence. It is a profound, creative burial of this possible loss of selfhood. ‘I love playing with irony’, Maqoma says. Irony is that paradoxical stuff at the heart of our lived experience. Maqoma’s searing irony, mourns multiple deaths and simultaneously commemorates freedom. Irony is Maqoma’s artistic tool for the re-awakening of our freedom.

And, if irony is Maqoma’s political tool of mining what is at the depths of our creative being ‘at the point of no return’, then ingoma is Nhlanhla Mahlangu’s method for how art can transform us. When Maqoma first pitched the collaboration idea to Mahlangu, Maqoma says, ‘I think in the beginning he thought I was crazy’. Voices no instruments! But, Mahlangu has since taken the role of crazy creative even further. Mahlangu says, the illustrious Soweto Gospel Choir immediately hated the chanting music. It was different. Only 12 members were supposed to be selected. Most were hoping not to get chosen…Until they met with the method behind the madness. On the first day, tears were shed, Mahlangu reports. On the last day, tears were shed again, Maqoma accounts. The tears were those of spiritual reconfiguration at first. Ingoma, as Mahlangu explained his method to the choir on the first day, ‘can be broken down to ngo/ma which means (on my mother/by my mother) lokhoke kusho ukuthi ingoma yisifungo which means you cannot tell lies’. The singers connected with what mourning meant for them and eventually all 18 members requested to be in Cion. Maqoma says, ‘By the time we closed, I had, you know, those big men from Soweto Gospel Choir in tears, just saying this music made them appreciate what they are doing as musicians and artists.’ Mahlangu who, along with Maqoma, is busy doing his Masters’ Degree on his method, says, ‘Ingoma is neither the music nor the dance, but it is the space that is charged, by the action of intense singing and dancing.’ Ingoma is ‘the medium that is sacred’. And, as ingoma comes from traditional practices of healing, ingoma is a medium of transformation. In Cion irony and ingoma bring song and dance together to graft transformative art of the highest experience.

1
What remains when there is NO EASTER SUNDAY FOR QUEERS
2
Cion Remembers Ways of Dying and Ways of Thriving
3
Concerning Blacks: A Review