My father is a peculiar man. He used to carry a plastic paper bag with him that embarrassed me, but in that bag, he also carried one of my favourite things; his stereo, an old school Technics that needed the largest battery. It wasn't a stereo or even a radio; it was an FM as we called it. On Sunday mornings, the dying battery would be placed in the sun to recharge. My father would summon me to put it in position, and the FM would blast out so much noise that the entire four-room house would be filled with noises from Ikwekwezi FM, uKhozi, Ligwalagwala FM and the likes. FM is not radio; radio is detached and feels impersonal; radio is 702, Power FM, Metro FM and the rest along the drift. FM grows on you and becomes a part of you, FM evokes feelings of nostalgia and familiarity. Sabelo Soko's Spin Venek Radio Experience arouses this, the feelings of being woken up by Nothembi’s Thiza Thiza Ngdlalela bouncing off the walls of our tiny house, the smell of sour porridge infiltrating the bedroom, along with the sounds of a shovel as the garden is being put back in shape.

After his well-received album Umkhondo he's back with the Spin Venek Radio Experience, which is, unsurprisingly, another cracker! The album is a pleasant, tender surprise, with Soko being more daring and experimental. His undeniably unique approach to poetry is ever-present, with some great stylistics being pulled now and then by accompanying the spoken word with music and the harmonies of amagwijo. The album is not formatted in a conventional manner, with individual tracks. Instead, it is offered as a single recording, which I believe has a greater purpose or meaning collectively than it would in separate pieces. Soko's vast range is showcased on the album, which is available on streaming sites such as Spotify and YouTube. 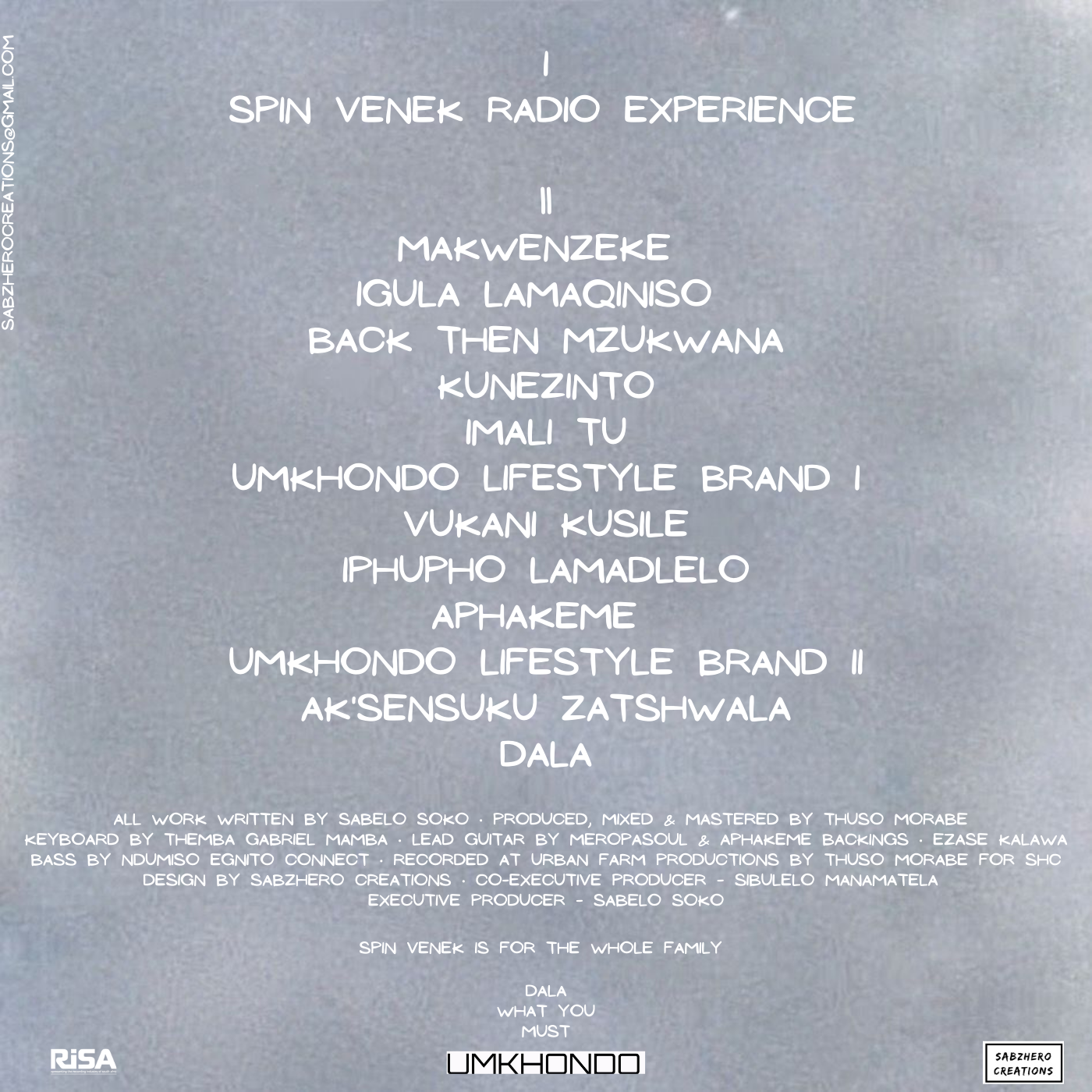 Listeners are sure to find some truths that resonate with them. The poems cover a wide range of topics, including humanity' sometimes-harmonious, sometimes-contentious history and existence, love, death, as well as everyday perceptions and realities, while exploring memory.

Each piece is grounded by its own particular spoken-word style, and is tinted with distinctive sounds and music that run throughout the tape like a stitch. After an interlude of what sounds like a radio presenter, Soko plays around with isifanakalo, followed by a clip of the infamous Maleven’s "It's only money that I want". The piece inspires the listener’s imagination, and one can almost hear the conversations taking place somewhere in a rendezvous. "Mina thatha lo pondo, wena thatha lo zambani ng’yakuthengisela" … the theatrics are evident. Sibhakabhaka senhliziy’ ebhakuza phez' kwefu is a particular favourite, reminding me of Mbongeni Ngema's Stimela sase Zola.

Soko's collection of work is marked by a sense of wisdom and a profound poise. The tracks inspire calm, yet they don't always stay still; like a deep breath on a crowded street, or a solitary meditation in the din of a speeding ghaido (metro rail train). They dramatise and swarm.
Compared to Umkhondo, Spin Venek is not too obvious but once it grows on you, it swells and it stays; just like the memories of my father’s FM.

*Catch Sabelo Soko’s Spin Venek Celebration, a music and poetry project release celebration with performances from Meropasoul, Jonathan Lefenya and Nomashenge. Supported by Themba Mamba on the Keyboard, Ndumiso Ntshangase on Bass and Mxolisi Shabangu on the Saxophone. Sabelo Soko will perform selected works from the project.