Imbongi, the king’s praise singer, plays an integral part in the royal household. Through a sharp eye, inquisitive mind and obsessive observation, creativity and the art of using words, imbongi not only praises the king but may also criticize, mete out advice, and tease, in an artistic fashion. Imbongi yenkosi is also known as the voice of the people.

In the production Shaka Zulu – The Gaping Wound, written by Bongani Linda and directed by Meshack Mavuso - Magabane, imbongi plays precisely this role. He is the narrator of the story of iSilo uShaka KaSenzangakhona, the most influential and powerful monarch in the history of iSizwe samaZulu.

Set in KwaBulawayo, esigodlweni seLembe, this is a musical through which Mavuso seeks to tell a specific part of one of the most notable human beings to have lived. When he was assassinated by his half-brothers, iLembe made a curse that they will never rule this nation, but it will be ruled by whites. “Angeke nilibuse, liyobuswa izinyoni zezulu”. The words of uNodumehlezi kaMenzi, uShaka akashayeki kanjengamanzi, were both a curse and a prophecy. This is evident today. We as Africans still suffer indignity in the hands of the colonizers, in our own land. Asikalibusi izwe. Libuswa ondlebe zikhanya ilanga.

The creators of this theatre piece aim to tell this part of king Shaka’s story and also highlight the death of his mother, uNdlunkulu uNandi waseLangeni, a tragedy that broke his spirit and probably the one thing that weakened him and saw him taking decisions that other members of the royal household deemed as irrational, leading to his assassination. The other part that is not left out in the story is that of the king’s rival with inkosi uZwide kaLanga weSizwe samaNdwandwe.

The play opens with imbongi introducing isigodlo senkosi, kwaBulawayo, and introducing himself as imbongi yenkosi, nomlandi. This colorful character is portrayed by the talented actor and storyteller Mduduzi Mabasa. 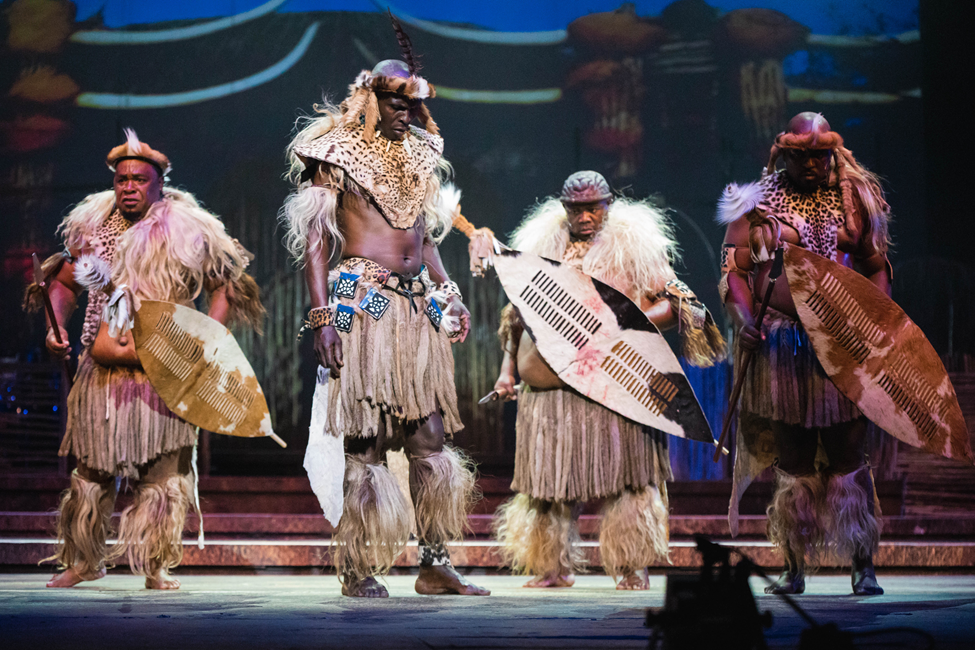 Among other cultural aspects, amaZulu are known for their entertaining and intense singing and dancing. The stage is filled with thunder as ibutho stomps the ground, besina kusuka uthuli lweZichwe. Ibutho is not alone but it is accompanied by izintombi on stage, whose chants bring goose bumps. Imvunulo idla lubi la, kudos to the wardrobe department. The set design is sublime - it almost feels like one is in the real presence of isigodlo, the king’s kraal.

Commenting on the importance of the play and why people should go see it, Nkanyiso Bhengu, who plays uDingane kaSenzangakhona, Shaka’s bother and one of the hands that stabs him, says:

“This is an important story. It will remind people of their identity as Africans”.

Bhengu also adds that the play will also remind us, as Africans, that we still have a long way to go when it comes to retaining our full independence.

As the title of play (The gaping wound) suggests, Shaka’s wound is still open and his spirit is still haunting us. Inxeba lisavulekile, lisopha.

Shaka Zulu - The Gaping Wound, is now showing at The South African State Theatre until 14 November 2021. Tickets are R130 at Webtickets, Pick 'n Pay stores and the theatre's box office.

1
Hands Off Mshoza & Kelly Khumalo
2
To Cheat or Not To Cheat
3
Easter Weekend: Sex, Church & Goats