In my view, one of the greatest legacies of uBab'uBantu Biko's Black Consciousness Movement (BCM), was its ability to make Black people believe that they are capable of engaging in complex philosophical reflection, on their condition as an oppressed people, and use such reflection to imagine a radically different world for themselves.

And do so without any European tutelage or supervision. For me, one of the Black Consciousness figures who embodied this capacity to imagine, was uBab'uMuntu Myeza. Under the auspices of the illegitimate- anti- black- european- invader regime of the National Party, on 6 May, 1987, there was to be a whites only general election in South AfriKKKa.

Some of the white parties participating in this election campaigned around the question: how best to solve the 'black problem?'. In reaction, a few days before this election, Black Consciousness giant and AZAPO leader, uBab'uMuntu Myeza, wrote a profoundly penetrating and deeply thoughtful critique of this election.

Myeza's critique was published on 4 May, 1987 by the Sowetan newspaper, under the heading 'Force White Voters Ignore'. As I understand it, his critique sought not only to expose the uselessness of this election to Black people, but also the dangerously deceptive role of white liberal organisations in 'mainstream' South AfriKKKan politics.

Most importantly, Myeza also dedicated a lot of time in his critique to articulating the alternative for Black people. It is his articulation of the alternative that gave birth to his now famous 'Change' thesis. This thesis formed part of the literature pack for political education classes, during my AZASM days.

One of the most important lessons that Myeza's critique reinforces (at least for me), is the importance of constant, critical and independent reflection by Black people in South AfriKKKa (and everywhere else they find themselves), on various existential questions.

This constant, critical and independent reflection about Black existential reality is glaringly absent in the practice of today's mainstream 'Black' political parties (including those that define themselves as 'liberation movements').

This lack is not just palpable in the policy documents of these parties, but also in the public political commentary that some of their more prominent leaders occasionally deliver.

It is this acute lack of penetrating political critique that often leads me to wonder whether today's 'Black' political parties still conduct political education classes for their members or whether they are suffering from a crisis of imagination? 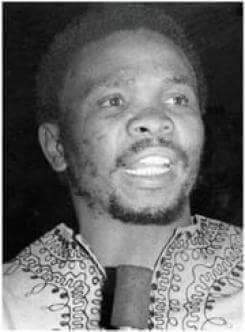 Below are extracts from Myeza's 1987 critique of the all-white elections.

"It may calm the liberal conscience to fool around in Parliament, enjoying the thrust and parry of politics, but with us Black people it is a matter of life and death. Black people have little patience with liberals of whatever shade who dabble in politics for the sake of catching a piece of the action."

THE FORCE OF CHANGE

"The real force of change doesn't lie in the serene corridors of the Cape Town parliament, nor does it lie on the pavements of the Pretoria 'Hoofstad'.

The force of change is not to be found in the sleek cocktail parties, the comfort of suburbia or in endless seminars and symposia arranged in the high-rise rarefied atmosphere of the so called "island of peace" syndicates.

Change lies in the streets of the ghettos prowled by ugly monsters. It lies in the hungry stomachs of workers who have nowhere to turn to.

Change lies in the hearts and minds of children who learnt too many things too soon. Change lies in the anguish and torment of families torn apart by jail and migratory labour. That is the force of change that the white election ignores.

That is the force that is so potent, so misunderstood and yet so tenacious and potent. It is this force that is equally unstoppable which the whites ignore at their peril. This force is Black people."

By republishing uBab'uMyeza's reflections on our condition as Black people, it is my hope that the younger Black activists of today (both within and outside the BC tradition), will be inspired by the thought of people like Muntu Myeza.

And in addition to being inspired, that they will use his body of work to uphold and advance the culture of radical and independent Black thought and practice. This culture is critical to the maintenance of the authenticity of our liberatory efforts as Black people. The 2nd of July this year will mark the 30th anniversary of the mysterious death of Muntu Myeza.

1
The Historical & Political Basis of Today’s Student Rebellions
2
To Vote or Not To Vote
3
Black World Salutations: Walter Rodney (1942 - 1980)