Review - Mother of All Eating

In 1999, South Africa’s honeymoon was rattled and dampened by scandalous reports of unthinkable corruption in the Strategic Defence Package that was South Africa’s military procurement programme, then popularly known as the Arms Deal. No lay South African outside the corridors of government at the time fathomed the possibility of such entities being overrun by persons with the power and aptitude to self-serve, in a climate that not only required of them to serve their country and countrymen equally but to also uphold their oath to rebuild a country that had been torn apart by a once brutal regime. Unbeknownst to optimistic and heartened South Africans, this was in fact to be the prelude to what has widely become known and affectionately referred to as “eating”.

Now a revised verb in many South African thesauruses, “eating” no longer refers exclusively to the act of consuming food. It now also refers to the act of plundering any and all state resources with a particular partiality to dibs, legal tender or what some may call “zak”. As South Africa still reels from the Arms Deal scandal and many consequent looting indignities, award-winning Directors in Khayelihle Dom Gumede and Phala Ookeditse Phala have aptly revived celebrated literary giant, Zakes Mda’s timeless and germane satirical masterpiece, “The Mother of All Eating (.. and the looting continues!)”. 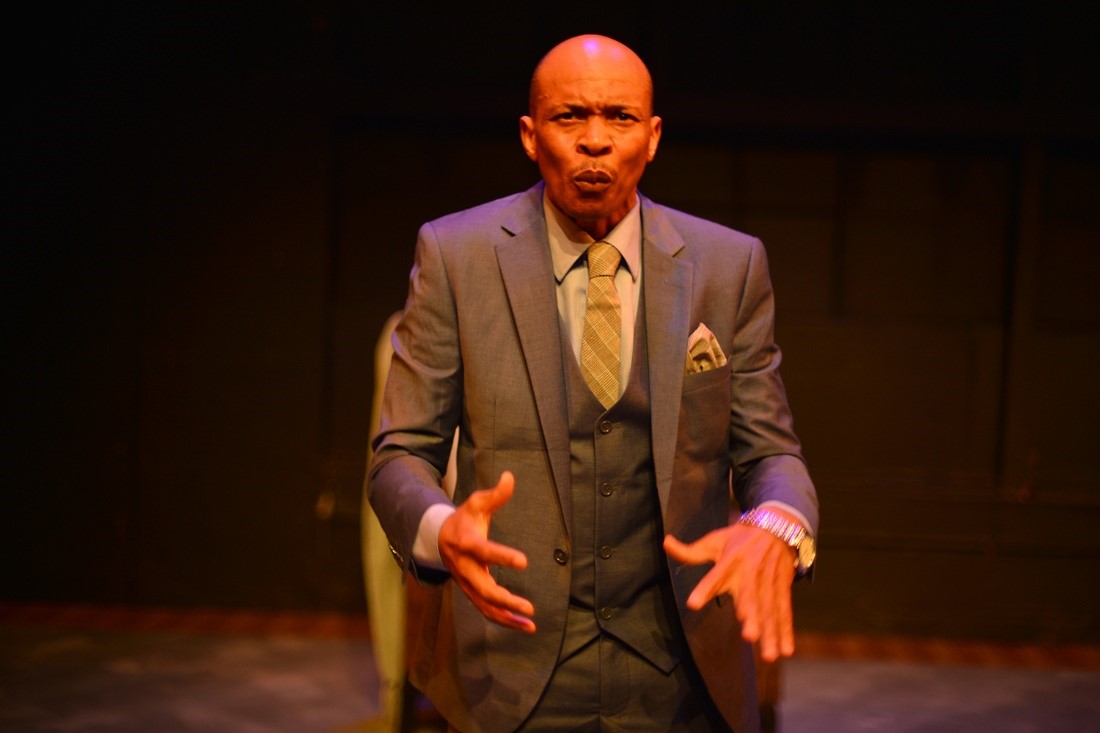 Having initially been written and staged 30 years ago, Gumede and Phala have fittingly recreated this magnum opus as an ode to a South Africa that is currently plagued by an assortment of commissions of enquiry and the concomitant crumbling state of the country’s economy.

Set in fictional Lesotho, the play centres around one character, “The Man”, who is the principal secretary to a government minister, a man who has made it against all odds, a true definition of “black excellence” and success post colonization.

Told through two bodies played by veteran histrions in Vusi Kunene and Thulani Nyembe who represent The Man’s actual person and his conscience, the show opens up with an immediate breaking of the fourth wall as The Man asks the audience what they would do when presented with an opportunity to eat? The audience is subsequently taken on a journey of his rise to riches and power as he is taught and enabled by those before and above him to pillage, equally empowering him to enable those close and after him to do the same. Having learned to work his way around the system, he of course does not hold back from expressing his disgust and disappointment at those who have the opportunity to plunder but do not, out of some righteous sense of self.

Concurrently with the journey of his rise, the audience witnesses a series of unfortunate events that form part of a downward spiral that leads to the end of his ill gained success. While invoking faces of yesteryear forces in Tony Yengeni, Dudu Myeni and Brian Molefe to name a few, the showcase equally awakens South Africans to the widespread nature of corruption in state entities by officials who have continually enriched themselves through the abuse of government coffers. The showcase also unapologetically exposes the catastrophic effects of greed and the tragic effects that accompany unchecked corruption.

A very strong performer, skilful Kunene held down the showcase as he fluidly matched several of Nyembe’s fluffs and saved the scenes. Needless to say, the void of an equally skilful and strong performer to co-star alongside Kunene was certainly felt as he recurrently employed his buoyancy to keep the scenes afloat. Perhaps by design on Gumede and Phala’s part as Nyembe played The Man’s conscience but indeed detrimental to the showcase in its entirety. Perhaps future productions could benefit from these considerations.

The Gumede and Phala tag team however, has proven itself extremely superior as their direction as seen through seamless transitions and actor mobility on stage, steered the audience’s attention with ease thus reaffirming the two directors’ stature in the theatre sphere. They ought to be celebrated for their efforts in reviving this production that remains relevant even today – not for what it represents but for engaging South Africans on matters current that very few dare to speak on. Their accolades are certainly well deserved.

Staged at the Market Theatre as part of the 45 years celebration from the 16th March to the 11th April 2021, Mother of All Eating is certainly worth your R90 from Tuesday to Thursday, R150 Friday to Saturday and R130 on Sunday as it discourses some of the most pertinent issues that South African society grapples with on a daily basis at present.