On Anti-Blackness & Readiness to Heal

“The place of listening in depth and with empathy is a crucial element in healing.” Stanley W. Jackson

Anti-Blackness as a structure has created a paradigm that forces Black people’s bodies into a dialectic with the world. The symptom is always social death; Black people’s vulnerability to violence. In this piece, I want us to explore how the violence in the township negatively affects our readiness to heal, making it difficult for Black people to heal, or at least begin the healing process.

The township as a site of violence is characteristic of a concentration camp, where one’s choice of living or dying is determined externally. Indeed, in South Africa, the township is an expression of social death and a symbol of conquest. Underdevelopment, lack of infrastructure, violent crimes, lack of proper education and healthcare institutions, lack of electricity and water supply, make life in the township almost impossible. How Black people make it out of such situations and end up as academics, doctors, artists and engineers or how Black people are able to still love and care for one another even when they live their lives on their burial ground, is supposedly what Fred Moten calls “an undercommon sociality”. A sociality that the world cannot take away from Black people, for it has not given it to them.

In Calvin Warren’s Onticide: Afropessimism, Queer Theory and Ethics, there is a passage on the murder of a Black queer person whose body, even after it had stopped responding, was mutilated. Warren describes this as “Overkill”; the mutilation that succeeds the murder being surplus violence. However, considering Black social death and blackness as a structure of absence, it is supposedly clear that the actual murder is in itself surplus violence altogether with the mutilation. This is to say, Black people die even before their actual death. Their murder and mutilation, or other forms of violence for that matter, are accounted for as surplus violence. The challenge for many of us is in making sense of the metaphysics of the living dead, who embody a metaphysical void that is expressed in the real as social death. How do we then heal when we do not have a grammar for our suffering? 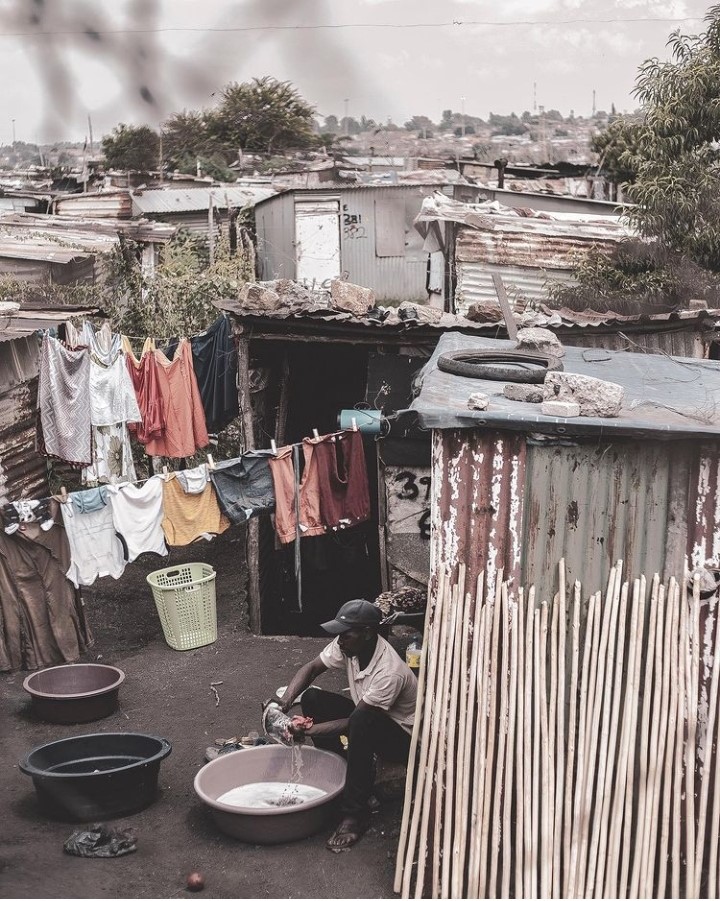 In families in the township, there are silent conversations of parents, uncles and aunts, where one’s readiness to heal is an investment of hope and expectation; where one’s wallowing in despair being too close a call; a reflection and a trigger of unresolved issues, unchecked depression and traumas not spoken about. It is in this sense, that kinlessness is made manifest in the existential reality that Black people share, indeed, as fathers, mothers, sons and daughters. The violence of anti-blackness does not recognise these relations. Fathers and mothers are not spared from humiliation, while sons and daughters are not spared from the violence.

Nahum Chandler and Moten have written extensively on ‘paraontology’ or ‘paraontological totality’ to describe a blackness that is the before and after of ontology, that ruins and evades ontology in a manner of fugivity. Blackness that refuses the same subjectivity it is denied, an affirmation of nothingness. Particularly, Moten disavows Black social death and often sketches a scenario where resistance is both a symptom and cure – a dialectical reversal of anti-blackness. The man obviously has a conceptual anxiety and anxious about the blackness of blackness shattering his desire to locate blackness itself as something close to the criminal, something that evades ontology, something fugitive. David Marriott in Judging Fanon, however, takes him on and raises the following concern:

“If x is always escaping then it cannot be said to ever entirely escape, it is clear that, according to Moten’s own logic, these descriptions leave it completely undecidable whether blackness is fugitive because it never quite escapes (its enslavement, its impurity), or whether it always thereby escapes how it is rendered black, or not, precisely because it is not an object.” (Marriott, 2016)

Black people are obviously creative, but their creativity and energy are not always for their own ends, toward a paradigm shift in their living conditions. Even our ideas of self-care, for instance, feed into the system of capitalism and deepening our dispossession. Saidiya Hartman helps us see how not only the slave’s performance is property of the master but even the slave’s own enjoyment of its performance. We should then find ways of using our energies and imaginations not in a manner that embraces blackness-as-social-death, but that gets us out of it. Most Black people think they have a place in capitalism, in the world as we know it, so they don’t want to end the world. They think anti-blackness and social death are a consequence of institutional practices in the same sense as sexism, homophobia and exploitation of workers are, whereas it is anti-blackness as a structure that instead provides ground for discrimination, exploitation and interpersonal conflicts.

“The evolution of blackness, in all kinds of systems we have found ourselves under, dictates that black people are fungible entities, open to gratuitous violence. That there is no autonomous power black people have over their bodies nor their lives. Perhaps then, our strength is in reproducing with the hope that those generations after ours would take back our long lost identity or perhaps there is power in collective consciousness and black radical love we are yet to put in praxis.” (Mutsila, 2019)

Black people must refuse inclusion, it has time and again been proven to be a fruitless exercise pleading with the world to recognise us as human, that our lives actually do matter. When we refuse inclusion into the world, we should also refuse to be included in its institutions and also refuse its cognitive maps and conceptual frameworks. What is then the politics of blackness as the figure of absence and as the structure of the “never-having-had”? What do we really have to lose?

1
Black Solidarity: Maybe Some Things Are Metaphysical
2
On Black-On-Black Violence
3
On Anti-Blackness & Readiness to Heal